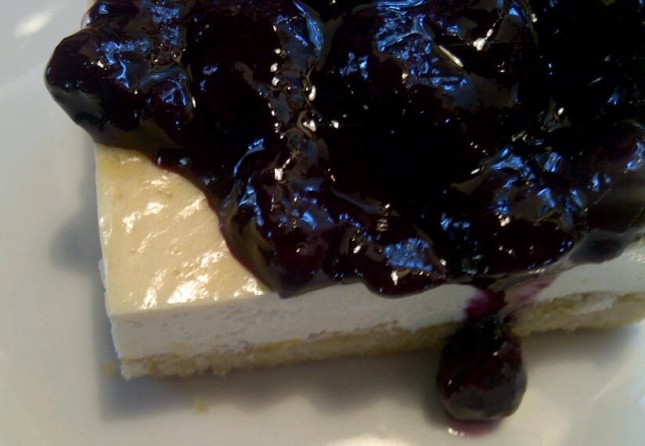 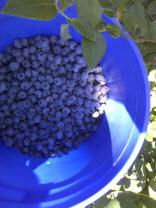 OK, I honestly had no idea that there was such a day until I saw a few posts about it this morning on Facebook 😉 but as luck would have it, I had already baked low carb cheesecake bars this morning to have when my parents come over for dinner this evening. My cheesecake was inspired not by a national day for decadent desserts, but rather by wanting to celebrate our bountiful blueberry harvest. My husband and son and I went picking this past Saturday, and since the weather was so perfect (75, sunny and breezy) we ended up with 20 pounds of berries before we realized it!

This is an easy-peasy recipe. I promise.

I start with the same almond flour crust that I used in the raspberry streusel bars and the frozen raspberry cheesecake bars. Then I added a layer of cheesecake batter that I zipped up in the food processor. Super simple. Add to that a blueberry topping that consists of a few cups of blueberries simmered down on the stove until they thicken up, and sweetened with a couple tablespoons of erythritol. Delish!

Make the crust: blend all crust ingredients together in a food processor. Line a 9″ by 9″ baking dish with parchment and press crust mixture firmly into pan. Bake for 20 minutes at 350 (I turn my pan halfway through baking.) Remove from oven and set aside.

Make cheesecake filling: In a stand mixer or food processor, beat softened cream cheese until smooth. Add sour cream and beat to combine. Add eggs one at a time, beating after each addition. Add vanilla, zest and erythritol and beat (on medium) until well-combined, but not whipped. Pour over crust and smooth out. Bake for 20 minutes, I turned pan halfway through baking to ensure even cooking. Remove and let cool completely. 12 servings, Less than 4 carbs per piece before adding topping.

Cut into serving size pieces and top with your choice of low carb toppings or just have plain. 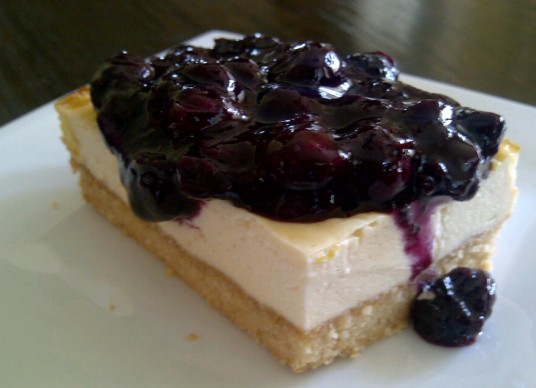 The blueberry sauce was made by simmering 2 C of fresh blueberries for 30 minutes or more, stirring occasionally, until the sauce is thickened and syrupy. I then stirred in about 2 Tb of erythritol to add a little sweetness. Cool and spoon over cheesecake bars to serve. 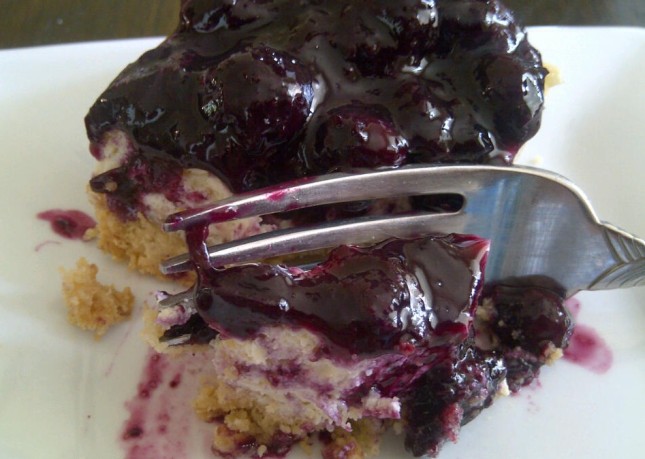