Some dishes are naturally grain-free and low-carb. Mussles is one of those, though in the old days, I would have sopped this up with crusty bread. For the most part, we aren’t big on eating breads anymore (even the grain-free ones) but if you are, by all means, enjoy it with this broth!!

This is one of those thrown-together recipes that just sort of happens and is dependent on what I have on hand. We had a bag of mussels to use, so I decided to saute some diced vegetables in coconut oil, add some chicken broth and chopped cilantro, and use the broth to steam mussels.

Again, not so much of a recipe as a list of ingredients that can change depending on what you like and what you have on hand. This had a nice spiciness to it without being too hot, and the ginger, garlic and cilantro add balance. The sun-dried tomatoes are slightly tangy and sweet, softened in the broth, and the fennel adds a slight hint of sweetness as well.

Saute all above ingredients together until they begin to soften.

Add broth, cilantro and seasonings and bring to a boil.

With broth, cilantro ans spices added in, brought to a boil.

Add mussels, toss, and steam, covered for several minutes or until mussels open. (Discard any mussels that do not open.) 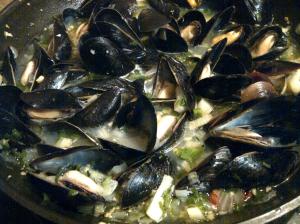